On its 25th anniversary, we look back at a notoriously panned video game adaptation that nevertheless inspired a cult fanbase.

By 1994, the video games Street Fighter (1987) and Street Fighter II (1991) had already sold over 10 million copies on the Super NES and Sega Genesis game systems. Street Fighter II in particular became a worldwide smash hit, and Capcom, its creator and publisher, wanted to capitalize on its success by adapting it into a film. The problem is, they wanted the movie to be written, location-scouted, cast, filmed, edited, and marketed in the span of one year (which is insane), so it could be released in time for Christmas in 1994.

In an unconventional move, they hired prolific screenwriter Steven E. de Souza (48 Hrs, Die Hard, Commando, The Running Man), a first-time feature film director who came up with the idea for the story during an all-night writing session, to helm a $33-million budgeted James Bond-style action film about a Warlord threatening world destruction and the good guys who thwart him. What followed was a year of script rewrites, large explosions, scorching temperatures, reshoots, production delays, and a limited budget due to the casting of Jean-Claude Van Damme and Raul Julia.

It’s a miracle that Street Fighter actually makes any sense, and it’s perhaps more surprising that, even after second, third, and fourth viewings, it’s still a lot of fun. Though it’s full of unremarkable street fights and stealth boats that aren’t very stealthy, it is in no way self conscious (“All I want to do is rule the world; is that so much to ask?”), and it features a legitimately great performance by Raul Julia.

Here are five reasons why we love Street Fighter and aren’t afraid to admit it.

It’s A Much Better Movie than Its Reputation Implies

Skimming through the reviews for the 11% Tomatometer-rated Street Fighter, you’re likely to read things like, “It’s an empty exercise in hyper-stimulation,” and it’s “a picture only an arcade junkie could cheer.” On the surface, Street Fighter may feel like an “empty exercise,” but upon closer inspection, it’s clear that de Souza, cinematographer William Frakin (Rosemary’s Baby, Tombstone, Bullitt), costume designer Deborah Kramer, and production designer William Creber (Towering Inferno, The Poseidon Adventure) did their best to create an interesting world, full of cheeky PA announcements (What do you do when a Bison trooper throws a grenade at your face? Pick it up, pull the pin and throw it right back at him), massive sets, and production design that is legitimately funny.

In the Blu-ray commentary, de Souza mentions several times that “it’s clearly supposed to be funny,” and the evidence is plain as day, especially when you look at the private sanctum of General M. Bison (Raul Julia). Bison is a megalomaniac who plans to create a Bisonopolis with expansive food courts, Bison swag, and towering skyscrapers with slanted roofs. In his private room, the fireplace and the swizzle sticks for his mixed drinks have Bison logos, and there’s an odd clown painting that must have been painted by Bison himself (and that fans wish they could own). Watch this clip, and look closely at everything on display; the production design is pretty inspired, and yeah, we wouldn’t mind owning that massive portrait of Bison on a horse, either.

Street Fighter wasn’t the movie audiences were expecting (zero “Hadoukens”), but if you can get past that, you’ll have a blast. Go back and listen to the weird PA announcements, pay attention to the one-liners, marvel at all the Bison tchotchkes, and try not to crack a smile.

The Convoluted Plot Is Part of Its Charm

Early on in the pre-production phase in 1993, the Capcom folks and de Souza decided they didn’t want to make a simple fighting movie in the vein of Bloodsport, The Quest, or Lionheart (all JCVD movies, by the way). In a bout of naiveté, de Souza originally chose to include only seven characters from the game in the script, which would allow him to put more focus on each one but meant at least 10 of the video game’s other characters would be excluded. Capcom understandably didn’t want to exclude any of the characters, because they were running a multi-billion dollar empire capable of selling mass quantities of merchandise, and more characters = more money-making opportunities.

Throughout the writing process, as de Souza was forced to add more and more characters, the script quickly got out of hand. Each new addition comes with a new subplot, and the film does its best to bring everyone together. Ryu (Byron Mann) and Ken (Damian Chapa) are huckster arms dealers who team up with Colonel Guile (Van Damme), Cammy (Kylie Minogue), and T-Hawk (Gregg Rainwater). Sagat (Wes Studi) and Vega (Jay Tavare) are real arms dealers who also run an underground fight club, while Dhalsim (Roshan Seth) is a doctor who creates super soldiers against his will, one of whom is Blanka (Robert Mammone). Dee-Jay (Miguel A. Núñez Jr.) and Zangief (Andrew Bryniarski) are cheeky henchmen who work for Bison (Julia). Chun-Li (Ming-na Wen), Balrog (Grand L. Bush), and E. Honda (Peter Tuiasosoppo) are reporters (and fighting legends) who want revenge by working their way up through various media outlets (it’s weird). During their interactions, there are staged deaths (Guile “dies” three times), Allied Nation bureaucracy subplots, $20 billion ransoms, enjoyable torture, food court discussions, a henchmen wage debate, and at least five speeches.

Normally, including 45 subplots in a video game adaptation would be a horrible idea, but here, it makes Street Fighter all the more endearing.

Before we get into one of the greatest lines in the history of cinema (it is, admit it), we want to point out that Raul Julia delivers it while holding two mixed drinks with orange garnishes and wearing a tailored silk robe and a nighttime hat (which means he has a daytime hat). The entire setup is silly, yet Julia nails the absurdity of the moment with a knowing confidence that only an actor of his caliber could muster. Also, his performance becomes infinitely more awesome when you consider he had recently undergone intensive treatment and surgery for stomach cancer, and he took the role because his kids loved the game.

Julia makes a meal of each syllable, and the slight smile on his face proves he’s in on the absurdity around him. After Chun Li unleashes a passionate speech about how Bison killed her father when he was an up-and-coming drug czar, he replies with one of the greatest burns in cinema history:

“For you, the day Bison graced your village was the most important day of your life. But for me, it was Tuesday.”

It belongs on the Mount Rushmore of underappreciated lines, right alongside Skeletor’s “loneliness of evil” moment in Masters of the Universe and Andrew Scott’s “It’s like kick ass or kiss ass, and I’m busting heads” monologue in Universal Soldier.

Prior to Street Fighter, Jean-Claude Van Damme was known for action-heavy performances that put more emphasis on punches, splits, and training montages than dialogue. In movies like Kickboxer, Bloodsport, Cyborg, Lionheart, Universal Soldier, and Hard Target, JCVD’s physicality and snake punching skills do most of the acting. However, since the screenplay for Street Fighter was written by de Souza, the man who wrote the quip-heavy Commando (“Let off some steam, Bennett.”) and The Running Man (“Killian, here’s your Subzero, now plain zero.”), Van Damme was asked to make speeches, drop one-liners, and do the best he could with de Souza’s dialogue and very little preparation time (which may or may not have been JCVD’s fault).

The “Muscles from Brussels” ventured a bit outside his comfort zone, and he did an admirable job unleashing all the ridiculous dialogue. For instance, he nailed his big “Who wants to go with me?” speech in one take, but he also says “This is the collection agency, Bison. Your ass is six months overdue, and it’s mine,” with a straight face.

Need more proof? Here are some of his best lines:

Guile: Four years of ROTC for this s–t!

Bison: You have made me a very happy man.
Guile: And next, I’ll make you a dead one.

Needless to say, de Souza didn’t win an Academy Award for his screenplay, but he gave the world an immensely quotable video game adaptation, and we’re all better for it.

The Final Moments Are Epic

After Bison has been defeated and Guile comes back from the dead (again), the remaining characters celebrate their victory by busting out variations of their popular poses from the video game. It’s an easter egg moment for fans of the game, and it highlights the international cast, which nowadays feels refreshing.

Shortly before they pose and break the fourth wall, though, a temple explodes in front of them. In a wonderful Street Fighter oral history done by The Guardian, the first assistant director of the second unit, Keith Haygate, admitted that only a quarter of the temple was supposed to explode. However, the whole thing blew up and destroyed $240,000 worth of scaffolding and styrofoam that was built over four acres. The cheeky posing and the unexpectedly massive explosion define the movie, because it’s a knowingly tongue-in-cheek film that had an explosive production. The film was rushed, and it suffered a number of setbacks, but it still pulled in $100 million worldwide on a $35 million budget. Street Fighter will never be mistaken as quality cinema, but it’s a lot of fun, and you shouldn’t feel guilty about loving it.

What is your favorite Street Fighter moment? Let us know in the comments. 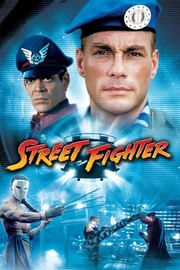