Binge Guide: 5 Things to Watch If You Love The Last Dance

Has ESPN's The Last Dance got you itching for more sports action onscreen? We've got five titles to feed that jones, from award-worthy docs to Spike Lee dramas and more.

Whether or not you’re a fan of basketball, the NBA, or ’90s pop culture, chances are you know who Michael Jordan is. Thanks to a historically successful run with the Chicago Bulls during the better part of the 1990s, a lucrative and impossibly effective endorsement deal with Nike, and the kind of cultural ubiquity enjoyed by just a select few, Jordan became arguably the most recognized and beloved athlete in the world. Ever. Now, as everyone continues to huddle at home, and with professional sports events postponed for the foreseeable future, ESPN has released a new docuseries to help scratch that itch, and viewers can’t get enough. The Last Dance alternately covers the 1997-1998 season of the Chicago Bulls as they attempt to complete the rare NBA “three-peat” — or three championship titles in a row — and retraces Jordan’s stunning career. It’s already become the most-watched documentary in the history of ESPN, and if you’re looking for more stuff like it to watch, Rotten Tomatoes correspondent Naz Perez has you covered. From a critically acclaimed Spike Lee drama to a documentary five years in the making to an action film co-starring Dennis Rodman and more, here’s what you should check out if every episode of The Last Dance keeps you begging for more. 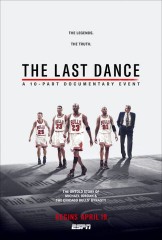