Plus, The Spy Who Dumped Me and The Darkest Minds fail to set themselves apart, Death of a Nation is D.O.A., and Making It and season 2 of The Sinner are quality TV.

This weekend at the movies, we’ve got a return to the Hundred Acre Wood (Christopher Robin, starring Ewan McGregor and Jim Cummings), a hopeful YA franchise (The Darkest Minds, starring Amandla Stenberg and Mandy Moore), an espionage buddy comedy with a distaff twist (The Spy Who Dumped Me, starring Mila Kunis and Kate McKinnon), an acclaimed look at modern tween existence (Eighth Grade, starring Elsie Fisher and Josh Hamilton), and the latest musings from the mind of Dinesh D’Souza (Death of a Nation). What are the critics saying? 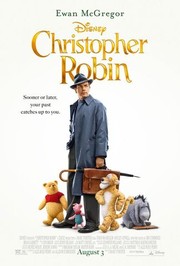 Families have been turning out in droves for Disney’s animated classics for generations — and as the grosses for live-action “reimaginings” like The Jungle Book and Beauty and the Beast have taught us, the studio can just as effectively mine box office gold out of flesh-and-blood versions of these stories. The studio hopes to extend that streak with this weekend’s Christopher Robin, starring Ewan McGregor as a grown-up version of Winnie the Pooh’s old pal, worn down by adult life and desperately in need of a little childhood magic. Naturally, a certain honey-loving bear resurfaces in Christopher’s life, reminding him of simpler times… and throwing a stuffed-with-fluff monkey wrench into a very important week at the office. It’s the type of setup we’ve seen play out in scores of family-friendly films over the years, and sticking the landing between “heartwarming” and “cloying” can be tricky, but critics say Christopher Robin does a fairly commendable job managing that balancing act, even if the film doesn’t quite measure up to the original stories by A.A. Milne. If you feel like it’s been too long since you visited the Hundred Acre Wood with this willy nilly silly old bear and his lovable menagerie of animal friends, a little critical bother probably won’t keep you from buying a ticket. 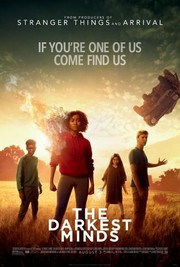 Alexandra Bracken’s The Darkest Minds launched a hit series of YA books in 2012, and the resultant trilogy — about a world in which a pandemic has wiped out most of the human population under the age of 20, and bestowed superpowers on the rest — has been waiting its turn for the big-screen treatment while a slew of other sci-fi-fueled YA bestseller adaptations filed into theaters. That type of patience is often a virtue — but rarely in Hollywood, where the latest trends tend to produce a glut of similar pictures that quickly leads to familiarity… and critical contempt. Such is the sad fate that has befallen this weekend’s film adaptation of The Darkest Minds, which reviews describe as a dystopian grab bag of genre clichés we’ve watched play out in countless other like-minded pictures — and often to more entertaining effect. (Even Darkest Minds star Amandla Stenberg will be familiar to audiences courtesy of her tenure in the Hunger Games franchise.) There’s no way of knowing whether these write-ups would have been any warmer had Minds arrived at the dawn of the YA boom, but as it stands, this is one would-be franchise starter that the critics are calling dead on arrival. Consider screening one of your similarly themed favorites — or reading the books — instead. 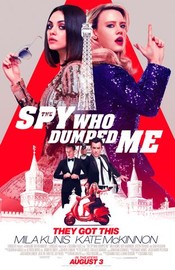 Scores of Saturday Night Live veterans have tried making the leap to the big screen over the last several decades, and not all of them have been cut out for film stardom. In fact, it’s a tricky transition no matter how talented a star might be — a difficulty that would seem to be facing current SNL cast member Kate McKinnon. A clear standout during recent seasons of the show, she’s also building a budding film career, but she’s yet to find a role that truly takes advantage of her impressive gifts — and unfortunately, critics say The Spy Who Dumped Me only adds to that somewhat disappointing streak. A comedy that pairs McKinnon with Mila Kunis for a caper throwing two ordinary gals into the midst of international espionage, Dumped has just enough action and laughs to pass the time, but as many reviews have pointed out, “just enough” is a pretty major disappointment when you’re talking about this cast. The stars are likable and the feminist spin is welcome, but both of The Spy Who Dumped Me‘s leads have been — and almost certainly will be — in more compelling fare. 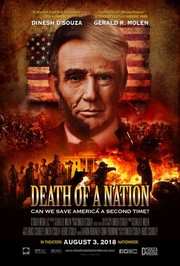 Most of the time, even if we feel like we know how well a movie will do with critics, the end results are still a mystery until that Tomatometer settles down. There are exceptions to every rule, however, and for this one, we look to the filmography of self-styled provocateur Dinesh D’Souza, who’s been facing the wrong end of the pundits since earning positive reviews for 2004’s Michael Moore Hates America. His last few releases have earned scathingly negative reviews, and Death of a Nation — in which D’Souza compares Democrats to Nazis and the Trump administration to Abraham Lincoln — continues the pattern, with critics dismissing the filmmaker’s arguments as more fundamentally unsound than ever. If you’re part of D’Souza’s target audience, those warnings doubtless won’t matter much; for everyone else, Death of a Nation isn’t worth seeking out unless you really want to see how things look from the right-wing fringe. 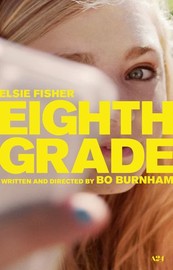 For many of us, middle school is a time of emotional turmoil, if not outright torment. All those melodramatic ups and downs should offer rich creative ground for filmmakers to travel, and yet most movies that make the attempt fail to truly capture the fraught hormonal battleground of the age. It’s gotten to the point where any adolescence-fueled movie that resists pandering or patronizing is worth holding up for special praise, and Eighth Grade — which marks the feature debut for writer-director Bo Burnham — has definitely earned its plaudits on that front; since making its festival debut earlier this year, this bittersweet look at a girl’s last few weeks before eighth grade graduation has attracted a wave of praise from pundits who’ve deemed it a refreshingly honest depiction of its moment. But Burnham’s work only tells part of the story: the movie, opening wide this weekend after a well-received limited run, is further elevated by an impressive central performance from Elsie Fisher as the story’s protagonist, 13-year-old Kayla. It all adds up to one of the happier surprises of the year, a film that’s sure to be part of the conversation during awards season, and a release now playing on more screens than ever — so if you’ve been looking forward to seeing it, check those local listings now.

Making It puts a whimsical, refreshing new spin on reality TV — one made even more fun by well-matched hosts Amy Poehler and Nick Offerman.

In its second season, The Sinner establishes itself as an engrossing who-dunnit thriller series with staying power.