Critics say Spike Lee's action-drama is one of his best efforts to date, and star Delroy Lindo should get some Oscar love.

Twelve years after depicting the experiences of African-American soldiers during World War II in Miracle at St. Anna, Spike Lee takes on the Vietnam War with Da 5 Bloods, and this time the reviews are much more positive. Critics are raving about the Netflix drama, which follows four Black vets as they return to Vietnam to dig up a buried stash of gold bars and retrieve the remains of their squad leader. The political action hybrid is being touted as one of Lee’s best ever, while Delroy Lindo’s performance is receiving the year’s biggest Oscar buzz yet.

Here’s what critics are saying about Da 5 Bloods:

How does it rank among all the Spike Lee joints?

One of Lee’s most powerful films to date.
– Ben Rolph, Discussing Film

Da 5 Bloods is one of Lee’s most complete films.
– Sean O’Connell, Cinema Blend

His most action-driven film to date.
– Chris Bumbray, JoBlo

Da 5 Bloods is his agit-prop action movie… one of the greatest films Spike Lee has ever made.
– Bilge Ebiri, New York Magazine/Vulture

Da 5 Bloods bears a… resemblance to Inside Man for the way it uses genre clothing as a wry Trojan horse.
– Eric Kohn, IndieWire

It’s another Lee effort that’s not quite as tidy as it could be… [but] Da 5 Bloods continues a strong run for Lee.
– Aaron Neuwirth, We Live Entertainment

How good is Delroy Lindo here?

Delroy Lindo offers the best performance of his career.
– Robert Daniels, The Playlist

Lindo makes audacious choices in what might be a career-best performance.
– David Rooney, Hollywood Reporter

In many ways, Da 5 Bloods is Delroy Lindo’s movie, with his performance fierce.
– Chris Bumbray, JoBlo

One of the best performances to come out of a Spike Lee joint… [it] almost rivals Denzel Washington’s in Malcolm X.
– Odie Henderson, RogerEbert.com

I have no idea if the Oscars will actually happen after this surreal year, but if they do, and the Academy fails to nominate Lindo, something is seriously wrong.
– Chris Evangelista, Slashfilm

Who else deserves some credit?

Da 5 Bloods is among Lee’s most awards-friendly material to date, so a full-throated campaign seems to be in order.
– Joey Magidson, Hollywood News

It deserves close to a dozen nominations… the picture, the script and director Lee all deserve nomination consideration, as does the lush and booming score by Lee’s longtime collaborator Terence Blanchard.
– Richard Roeper, Chicago Sun-Times

So the music is good?

Though this compliment sounds like a broken record, the work done by life-long Lee collaborator Terence Blanchard on the 5 Bloods score is exceptional. The music elevates the material, cementing Blanchard’s status as God-tier in the realm of film composers.
– Sean O’Connell, Cinema Blend

The only thing slightly souring it is an often distracting score by Terence Blanchard, but even that eventually finds its groove.
– Chris Evangelista, Slashfilm

Terence Blanchard’s original score is, at times, completely overbearing, and can feel unrelated to the image.
– Jordan Hoffman, TV Guide

What about the decision not to de-age the older actors in the flashback scenes?

It’s a testament to [Lee’s] faith in the audience that you never question it. The choice works.
– Chris Bumbray, JoBlo

In these actors’ weary faces, incongruously bridging the divide between past and present, we see the most literal possible visualization of a war without end.
– Justin Chang, Los Angeles Times

The sentiment that these men never left the war, and the war never left them, even when they returned home to grapple with their grief, visually works. Barely.
– Robert Daniels, The Playlist

How is the script?

Much of the pleasure of the movie comes from the men’s nonstop grousing, and if the arguments sometimes seem rigged or overblown, they are rarely under-felt.
– Justin Chang, Los Angeles Times

Da 5 Bloods has a mostly solid script… but some moments don’t ring the same way as others.
– Spencer Perry, ComicBook.com

Da 5 Bloods is so sophisticated early on that it’s disheartening to see it fall back on lazy clichés.
– Peter Debruge, Variety

Lee has always been a master of using the cinematic tropes that have always worked as an okey-doke: the left hand lures you in with the familiar before the right hand blindsides you with the unexpected punching power of the intended point.
– Odie Henderson, RogerEbert.com

Does Lee do a good job juggling the various plot elements?

At just over two and a half hours, there’s certainly a lot of movie for Lee to work with, and I’d say the time is well spent.
– Aaron Neuwirth, We Live Entertainment

There’s a lot of plot unpacked in the 2.5-hour movie’s first half, but Lee shuffles through it with fluidity and verve, aided by the tetchy but mostly genial group’s camaraderie.
– David Rooney, Hollywood Reporter

Lee got jammed up by jamming too much into 2008’s The Miracle of St. Anna… Not here, where the subject gets the laser focus it demands.
– Peter Travers, Rolling Stone

The movie wanders off in some odd directions, but the Bloods’ bond keeps it grounded.
– Eric Kohn, IndieWire

Da 5 Bloods works on a number of levels… While the lack of a true focus can muddle the message somewhat, Lee is never short on big ideas and he’s one of the few directors we would trust to share them in the way he does.
– Travis Hopson, Punch Drunk Critics

Lee’s film suffers from languid pacing, partly owing to the epic nearly bursting open from its litany of themes.
– Robert Daniels, The Playlist

Is this the movie we need right now?

Da 5 Bloods couldn’t have come at a more timely point in the year.
– Danielle Solzman, Solzy at the Movies

Da 5 Bloods arrives at a time when the director’s singular voice couldn’t be more needed… [Lee] has made another film that uncannily meets its moment.
– Ann Hornaday, Washington Post

Exceptionally well timed, since its political anger feels so urgent that it can scarcely be contained by the parameters of a TV screen.
– Justin Chang, Los Angeles Times

The last fifteen minutes… plays so relevantly and powerfully, it’s as if Lee filmed the concluding scenes during the last two weeks.
– Robert Daniels, The Playlist

Let’s be clear: Lee has always been ahead-of-his-timely… it’s hard to imagine a more resonant movie for this moment.
– Peter Debruge, Variety

Lee’s point, which he makes swiftly and with blistering efficiency, is that it can’t be called prescient when it’s sadly perpetual.
– David Rooney, Hollywood Reporter

Lee has made more than a soul-stirring film for our time. He’s made one for the ages.
– Peter Travers, Rolling Stone 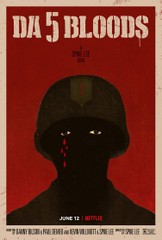