Despite opening to mixed reviews in 1980, Stanley Kubrick’s The Shining has become one of the landmark horror classics of all time. That’s why creating a legacy sequel almost 40 years later was seen as a daunting task. Fortunately, Mike Flanagan’s Doctor Sleep, a follow-up to both Stephen King’s novel of the same name and Kubrick’s adaptation of its predecessor, is receiving mostly positive reviews out of the gate. Not everyone considers the new installment worthy, but thanks to Flanagan’s unique talents and at least one must-see performance, the movie seems set to satisfy fans of both of its sources.

Here’s what critics are saying about Doctor Sleep:

Is it a worthy follow-up to The Shining?

“I still don’t know if The Shining needed a second act, but Doctor Sleep presents one that’s fresh and unsettling enough to justify its existence.” – Owen Gleiberman, Variety

“Doctor Sleep may not be ‘necessary,’ per se, but it’s highly engaging and entertaining on almost every level, and that makes it absolutely worthwhile.” – Germain Lussier, io9

“[It’s] not only a satisfactory sequel, but one that refuses to use the original as a crutch while still integrating it appropriately.” – Deirdre Molumby, entertainment.ie

“[It’s] both a magnificent movie in its own right and a worthy follow-up to one of the greatest films of all time.” – Eric Eisenberg, Cinema Blend

“Doctor Sleep is somewhat entertaining and interesting but cannot, in any way, compare to its predecessor.” – Allison Rose, FlickDirect

So we should just avoid comparing it to Kubrick’s film?

“A completely different beast to The Shining…Flanagan and Doctor Sleep forge their own place in horror canon.” – Kyle Anderson, Nerdist

“If we are going to get an endless string of sequels and reboots, then the best we can probably hope for is for talented artists to use those sequels and reboots to say the things they want to say about the stuff that matters to them.” – Matt Singer, ScreenCrush

Does it honor both the Kubrick movie and King’s novels?

“Doctor Sleep works as both a sequel to the book and the movie of The Shining, bringing together the two universes seamlessly.” – Ian Sandwell, Digital Spy

“Flanagan weaves fluidly between the separate worlds of King and Kubrick in much the way that Dan mediates between the living and the dead.” – Anton Bitel, Little White Lies

“In a way that poignantly echoes the plight of young Danny himself, the new movie sometimes brings to mind a child caught between two quarreling parents, and attempting to stage a reconciliation.” – Justin Chang, Los Angeles Times

“It stays true to the source material but also satisfies fans of the film. It’s a delicate balance, to be sure, but one that absolutely works. Maybe too well.” – Germain Lussier, io9

“Pandering to dueling source material results in a jagged puzzle beneath both of their standards.” – Eric Kohn, IndieWire

Do you need to have seen or read The Shining?

“There’s absolutely an argument to be made that Flanagan relies a bit too much on Kubrick’s film.” – Germain Lussier, io9

“It’s a fascinating application of cultural memory in the service of storytelling, considering how much its central emotion mandates audience investment in the earlier events.” –  Eric Kohn, IndieWire

What’s it like to return to the Overlook Hotel?

“As a fan of Kubrick’s movie, as Flanagan clearly is, it’s supremely satisfying to see the iconography of The Shining as a weapon against an even greater foe.” – Kyle Anderson, Nerdist

“While Flanagan manages to make them look almost identical, there’s an uncanny valley quality to what we’re seeing. Yes, it’s technically correct – but something seems off.” – Chris Evangelista, Slashfilm

“The time at The Overlook Hotel is frustratingly short considering the time we spend waiting to get there.” – Jenny Desborough, Daily Express

“Once the movie circles back to the Overlook Hotel for a prolonged half-hour climax, the whole endeavor collapses into cliché.” – Eric Kohn, IndieWire

“An extravagant act of fan service. It taps into the minutiae of Kubrick’s masterwork without fully teasing out its mystery.” – Justin Chang, Los Angeles Times

What will surprise us most about the film?

“It’s a warmer film than Kubrick was perhaps ever capable of, and more interested in its characters.” – Chris Hewitt, Empire Magazine

“There are some heart-breaking scenes in there.” – Deirdre Molumby, entertainment.ie

“Doctor Sleep is one of the best-looking movies of 2019.” – Ian Sandwell, Digital Spy

“Despite its warm heart, Doctor Sleep doesn’t skimp on the horror. The film packs in several nightmarish moments, many of them involving endangered children.” – Chris Evangelista, Slashfilm

“The True Knot remain a chilly and effective creation, cut from the same cloth as the ruthless family killers of The Devil’s Rejects but with more daunting powers.” – Eric Kohn, IndieWire

“After sitting through so many fright-films-of-the-week that bamboozle rather than terrify, I found myself lured into a movie that dares to depict evil as something that makes us suck in our breath.” – Owen Gleiberman, Variety

“There’s a moment involving a hand that will make you squirm.” – Ian Sandwell, Digital Spy

“While I generally didn’t find Doctor Sleep all that scary, there are a couple of excellent sequences that remind you why Flanagan is the important horror filmmaker he is.” – Kyle Anderson, Nerdist

“The whole thing plays more like a solid, psychological thriller than a horror movie. Which is fine, but perhaps different from Flanagan’s intention.” – Germain Lussier, io9

How is Ewan McGregor as a grown-up Danny Torrance?

“McGregor gives one of his best performances in a long time.” – Matt Singer, ScreenCrush

Who else stands out in the cast?

“When she’s around, she’s the whole show, threatening, cajoling, erotically boiling when prey is at hand. The actress, along with the character, looks to be having a jolly old time… she gives every moment she’s onscreen here a real kick.” – Todd McCarthy, Hollywood Reporter

“Truly the performance that everyone will be talking about… set to be remembered as one of the all-time great cinematic Stephen King villains.” – Eric Eisenberg, Cinema Blend

Is the length an issue?

“It doesn’t quite justify the length.” – Ian Sandwell, Digital Spy

“[It’s] a film that remains for too long on the low burner; it would be hard to argue that this really needed to run two-and-a-half hours.” – Todd McCarthy, Hollywood Reporter

“Even the biggest Stephen King fans may find themselves checking their watch.” – Jenny Desborough, Daily Express

“Doctor Sleep, unlike the whack-a-demon It films, at least uses its length to sink into a mood of genuine contemplative dread.” –  Owen Gleiberman, Variety

Doctor Sleep is in theaters November 8. 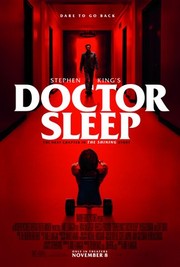