Critics say it isn't quite on par with the first, but its dazzling visuals, laugh-out-loud humor, and catchy songs should make fans happy.

But is Frozen II worth the wait, or is it just a pointless cash grab? The first reviews of the follow-up aren’t as enthusiastic as they were for its predecessor, but most critics agree it’s a worthy new adventure that should dazzle fans with its stunning animation, laugh-out-loud humor, and fun soundtrack.

Here’s what critics are saying about Frozen II:

How does the sequel compare to the original?

“The sequel is not only better than the 2013 original, but it also improves the original film by adding to its mythology and shining a light on the events of that story in a whole new way.” – Germain Lussier, io9

“Frozen II is nominally a slight improvement on its predecessor.” – Josh Spiegel, Slashfilm

“Frozen II is as magical as its predecessor.” – Danielle Solzman, Solzy at the Movies

“It’s a sequel that stands toe-to-toe with the original, which isn’t exactly an easy feat to accomplish.” – Matt Rodriguez, Shakefire

“If it doesn’t quite match the original, it comes very, very close.” – Ian Sandwell, Digital Spy

“The film itself is a satisfying but very familiar retread of the first movie.” – Matt Singer, ScreenCrush

And how does it compare to other Disney sequels?

“It carries the same lackluster energy of one of Disney’s direct-to-video sequels from times past: 1998’s Lion King 2: Simba’s Pride, or 1994’s The Return of Jafar.” – David Jenkins, Little White Lies

“Frozen 2 gives off the same lackluster dimness that hand-drawn direct-to-video sequels like Return of Jafar and Beauty and the Beast: The Enchanted Christmas did back in their humbler day.” – Richard Lawson, Vanity Fair

Will fans enjoy it?

“The characters and music plus the gorgeous visuals are enough to make Frozen II a fun film even if it has none of the staying power of its predecessor.” – Matt Goldberg, Collider

“Frozen II is anything but a mindless remake. Ironically, Frozen fans may secretly be wishing for a more straightforward rehash.” –  Peter Debruge, Variety

Is the new story worth the wait?

“Frozen 2 is crammed with material, most of which works.” – Kate Erbland, IndieWire

“The mythology is somehow both overly complicated and oddly perfunctory. Really, the plot is mainly an excuse for the characters to hang out. And why not?” – Justin Chang, Los Angeles Times

“A lot goes on but nothing really happens…the only surprising thing about this film is how complex and contrived it is.” – David Jenkins, Little White Lies

“Here’s the one problem with Frozen II: the structure of the story…most of it comes in dense, exposition-heavy chunks that are staggered across the film.” – Germain Lussier, io9

“The narrative is a disastrous mess, to a thoroughly disappointing degree, where character and story aren’t appropriately motivated.” – Courtney Howard, Fresh Fiction

What about its message?

“All children should see Frozen 2, not just little girls. Because when Kristoff says, ‘I’m here. What do you need?’ that’s worthy of a discussion with everyone.” – Tania Lamb, Lola Lambchops

“Several times I started crying because I was laughing so hard, and once, I had a hard time catching my breath. This movie was funnier than I ever imagined it would be.” – Tessa Smith, Mama’s Geeky

“The sequel is funnier, with Olaf stealing the show… even the most die-hard Olaf critics will find him hilarious in this.” – Ian Sandwell, Digital Spy

“The biggest problem is that Olaf’s lines are all so funny the audience was laughing too hard for me to hear half of them.” – Germain Lussier, io9

“What surprised me most about the film was just how hilarious they make Olaf. He was great in Frozen, but he absolutely steals the entire film this time around.” – Matt Rodriguez, Shakefire

“Olaf totally steals the show this time as he grows up to ask the serious questions that every child is thinking.” – Tessa Smith, Mama’s Geeky

“This time around, [Olaf is] a scene-stealing, joke-dispensing machine from start to finish, and with a pretty good hit-to-miss ratio.” – Justin Chang, Los Angeles Times

“Every time he opens his mouth I felt like doing cartwheels.” – Charlotte O’Sullivan, London Evening Standard

How are the new characters?

“The newbies have their moments and all together make for a grander experience.” – Germain Lussier, io9

“There’s also a handful of new friends to meet, all of which are welcome, many of which are underserved (Sterling K. Brown is the lone newbie who really gets to leave a mark).” – Kate Erbland, IndieWire

“New sidekicks like playful wind spirit Gale and Bruni the Salamander are fun and cute but don’t add much to the proceedings.” – Courtney Howard, Fresh Fiction

“There are very few new characters of any consequence.” – Matt Singer, ScreenCrush

“The real power of this movie comes through its gorgeous, often jaw-dropping animation… whatever else can be said, Frozen II is truly beautiful.” – Josh Spiegel, Slashfilm

“Frozen 2’s weirdest, and maybe worst, sin is how routinely unpleasant it is to look at. The animation is oddly bland and inert.” – Richard Lawson, Vanity Fair

“The soundtrack is just as fun as the first Frozen.” – Danielle Solzman, Solzy at the Movies

“When I tell you that this soundtrack is better than the first one, I know it will be hard for you to believe me. But it is true.” – Tessa Smith, Mama’s Geeky

“There really is a song for every mood, and I can see myself listening to the soundtrack on repeat.” – Matt Rodriguez, Shakefire

“The song-writing team’s contribution to the franchise’s success can scarcely be over-estimated.” – Todd McCarthy, Hollywood Reporter

“There’s nothing wrong with these songs, per se, but the effort to replicate their previous success weighs down any possibility of letting them shine on their own.” – Alonso Duralde, The Wrap

“They all sound fine, and are sung with the usual bombast… and yet, not a half-hour after seeing the movie, I couldn’t call up a single melody.” – Richard Lawson, Vanity Fair

“The creative team have brought in the D-list for songwriting detail… with every song coming across like over-produced, over-polished album track filler with no hooks and no heart.” – David Jenkins, Little White Lies

Does it deliver the next “Let It Go?”

“The ‘Let It Go’ of Frozen II is called ‘Into the Unknown’… it’s guaranteed to entrance exhibitionist preschoolers looking for a new song to belt out at the top of their lungs.” – Matt Singer, ScreenCrush

“There isn’t one A-plus standout like ‘Let It Go’ from the first film, but this time around, all the songs feel more uniform quality-wise. There isn’t a dud in the bunch.” – Germain Lussier, io9

“The songs don’t have that same punch this time around… there’s nothing in here that I think will take the world by storm like ‘Let It Go.’” – Matt Goldberg, Collider

“Although not a single song in this sequel is likely to have the same iconic reach of songs such as ‘Let It Go’ or ‘Love Is An Open Door,’ there is still plenty here to shout about.” – Linda Marric, HeyUGuys

Is it still a good time for families?

“Tip: the youngest Frozen fans might need some warm hugs to get through a fraught final act.” – Kate Erbland, IndieWire

“Frozen II is arguably a darker, more mature film… it feels like it’s marketed to a slightly older fanbase than the first – perhaps the kids who grew up loving the initial entry.” – Hannah Lodge, The Beat

Frozen II is in theaters November 22. 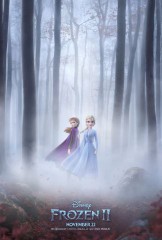 #1
Adjusted Score: 97997%
Critics Consensus: Frozen II can't quite recapture the showstopping feel of its predecessor, but it remains a dazzling adventure into the unknown.
Synopsis: Elsa the Snow Queen has an extraordinary gift -- the power to create ice and snow. But no matter how... [More]
Starring: Kristen Bell, Idina Menzel, Josh Gad, Jonathan Groff
Directed By: Chris Buck, Jennifer Lee