Plus, learn the cast's weaknesses (they include eye contact and Diet Coke) and find out who Danny DeVito thinks would win a game of Nightcrawlers between Dwayne Johnson and Kevin Hart.

Just when they thought they were out, Jumanji pulled them all right back in. Dwayne Johnson, Jack Black, Kevin Hart, and Karen Gillan return to star as the in-game avatars in Jumanji: The Next Level, the sequel to 2017’s surprise smash hit Jumanji: Welcome to the Jungle, and this time, they’re joined by newcomers Danny DeVito, Danny Glover, and Awkwafina. Ahead of Jumanji: The Next Level‘s release, Black, Gillan, Awkwafina, DeVito and Glover all sat down for a chat with RT editor Jacqueline Coley in Mexico to chat about the new film, reveal each other’s strengths and weaknesses, and recast some iconic buddy movies. Plus, Black, Awkwafina, and Gillan compose a Jumanji theme song on the spot… and it wasn’t Awkwafina who busted out the freestyle. 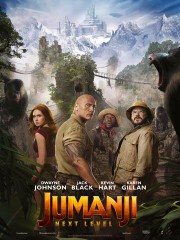