Jet Li's and Donnie Yen's Daughters Convinced Them to Do Mulan

Mulan director Niki Caro and stars Yifei Liu, Li, and Yen also chat about the importance of the Mulan story in Chinese culture and what it's like to adapt one of Disney's beloved animated films.

After delays following the shutdown of theaters in the wake of COVID-19, Disney’s live-action take on Mulan is finally being released – on the Mouse House’s streaming service, Disney+. Earlier this year, Rotten Tomatoes Editor Jacqueline Coley sat down with director Niki Caro, and stars Yifei Liu, Jet Li, and Donnie Yen, to talk about the importance of the Mulan story in Chinese culture, the task of adapting the beloved Disney cartoon to a live-action format, and how Li and Yen’s daughters played a big part in convincing them to join the film. 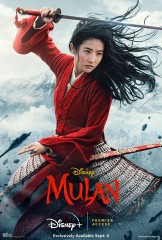 #1
Adjusted Score: 94439%
Critics Consensus: It could have told its classic story with greater depth, but the live-action Mulan is a visual marvel that serves as a stirring update to its animated predecessor.
Synopsis: To save her ailing father from serving in the Imperial Army, a fearless young woman disguises herself as a man... [More]
Starring: Liu Yifei, Donnie Yen, Jason Scott Lee, Yoson An
Directed By: Niki Caro