Life of the Party Crashes

Plus, Breaking In lacks thrills, but Showtime's Patrick Melrose is an incisive drama, and Revenge and Beast are Certified Fresh.

This weekend at the movies, we have Melissa McCarthy stirring memories of the Triple Lindy (Life of the Party, co-starring Molly Godron Gillian Jacobs) and  Gabrielle Union teaching some unlucky kidnappers a few tough lessons in a mother’s love  (Breaking In, co-starring Ajiona Alexus and Billy Burke). What are the critics saying? 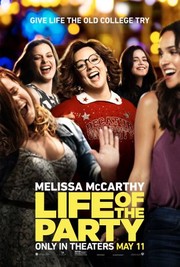 College: a time and place for young people to discover who they are by seeking out new experiences and daring to try new things outside the bonds of family. Usually, anyway — sometimes your mom ends up going back to school at your university and totally (albeit unintentionally) harshing your vibe. Such is life for Life of the Party‘s Maddie Miles (Molly Gordon), who finds herself sharing a campus with her mother Deanna (Melissa McCarthy) after her parents split up. It’s a painful new chapter for Deanna, but she turns lemons into lemonade by — as one might reasonably infer from the title — discovering her inner twentysomething, taking full advantage of college life so enthusiastically that her fellow co-eds nickname her Dee Rock. If you’re reading this and thinking you’ve seen these storyline beats play out before in Rodney Dangerfield‘s Back to School, well, you aren’t far off; unfortunately, critics say it’s nowhere near as funny this time around. McCarthy remains a fierce talent, and she’s surrounded with a terrific supporting cast here, including Maya Rudolph, Gillian Jacobs, and Matt Walsh, but reviews describe Life of the Party as a frustratingly middling comedy that never really figures out what to do with all that talent and fails to produce consistent laughs. With all these funny people in one place, the end result isn’t without a few moments, but all things considered, this is a serviceable premise that’s already been explored to more entertaining effect. 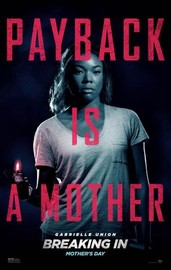 As Sally Field taught us in Not Without My Daughter, there’s no situation too dangerous or daunting to keep a mother from her child — and this weekend, Gabrielle Union is delivering that lesson all over again with Breaking In, in which hell hath no fury like a woman whose kids have been taken captive and held for ransom in a home equipped with a seemingly impenetrable security system. It’s an appealingly gonzo setup for a movie being released in time for Mother’s Day, and Union, always a strong screen presence, would seem to be well-matched for the role of a woman prepared to prove that, as the poster promises, “payback is a mother.” Alas, what looks interesting on paper often tends to lose its way on the journey to the big screen, and that appears to be the case for Breaking In. Critics say that while Union is clearly committed to the role — and the best thing about the movie — it isn’t enough to make up for thinly sketched characters and a slapdash plot that evaporates under scrutiny. Union deserves more chances to prove she can carry a picture — and hopefully, this won’t be the last time Hollywood serves up a left-field choice for Mother’s Day weekend — but in the meantime, this is one thriller you don’t need to rush out and see.

Patrick Melrose is a scathing indictment of British high society’s inherited dysfunction, cruelty, and the wealth that enables them. The Crown this ain’t.