From the directors who introduced us to Catfish and the co-writer of next year’s The Batman comes Netflix’s latest fill-in for the summer blockbuster void. Project Power offers a pharmaceutical twist on the superhero genre and stars Jamie Foxx, Joseph Gordon-Levitt, and Dominique Fishback, whom critics say steals the movie away from the bigger names – first reviews of the movie highlight her performance above all else. But the film is also mostly recommended as more-than-suitable home viewing with impressive visuals and interesting themes that go beyond the usual comic book fare.

Here’s what critics are saying about Project Power:

Will It Satisfy Our Summer Movie Needs?

“Project Power is the type of movie we’ve been missing.” – Julian Lytle, idobi.com

“Another ‘blockbuster’ which seems destined to be enjoyed by millions of subscribers in the week after release and then promptly forgotten about forever.” – Patrick Cremona, Radio Times

“The early action sometimes calls to mind the overblown Eurotrashy bang of Luc Besson and his ’90s disciples.” – David Rooney, The Hollywood Reporter

“In the way that movies like Lucy and Limitless are fun [it is] the kind of loony, kinetic thriller that knows it’s all just shenanigans, and leans in.” – Leah Greenblatt, Entertainment Weekly

“Project Power takes the Limitless concept and runs with it to glory.” – Julian Roman, MovieWeb

“It has conceptual similarities to the Bradley Cooper vehicle Limitless…let’s even throw in a touch of X-Men, The Matrix, Firestarter and Jacob’s Ladder.” – David Rooney, The Hollywood Reporter

“Similar to the way that Robocop satirized the convergence of private corporations and law enforcement as the ultimate form of capitalism, [Project Power] explores, in a less satirical manner, what it means to become powerful.” – Douglas Davidson, Elements of Madness

“Of the many movies with which Project Power shares probably too much in common, the most unexpected, albeit perhaps telling, is Ang Lee’s 2003 Hulk.” – Todd Gilchrist, What to Watch

Is it a little too derivative of those films?

“It’s drawing on so many decades’ worth of pulp clichés that the movie can scarcely bother to pretend it’s anything but a remix.” – Owen Gleiberman, Variety

“It is refreshing, at least, to see a movie that is its own idea, even if many of its tropes are borrowed from the glut of superhero movies.” – Richard Lawson, Vanity Fair

“They know that the way to mainstream hearts and wallets is…by soothing them with the same candy they’ve grown to love.” – Manohla Dargis, New York Times

“Is it even possible for a superpower movie to be truly original anymore? In fact, what makes Project Power entertaining is its canny combination of familiar ingredients in a textured real-world milieu that gives it fresh flavor.” – David Rooney, The Hollywood Reporter

“There is enough detail and psychological nuance in Mattson Tomlin’s clever script to make Project Power more intriguing than most of what Marvel and DC have to offer.” – Johnny Oleksinski, New York Post

“The way [Tomlin] weaves in the social commentary of the topics they cover…I loved that from a writing standpoint. This film tackles so much more.” – Sharronda Williams, Pay or Wait

“The film features a pretty strong social commentary on the biased power structure of America, along with systemic racial injustice and corrupt law enforcement.” – Nicola Austin, We Have a Hulk

Could the social commentary have been a little stronger?

“I couldn’t help but see a missed opportunity for a richer, more complex look at what the politically powerful do when the poor gain some power of their own.” – Travis Hopson, Punch Drunk Critics

“It feels shallow, unwilling to commit to bigger statements beyond vague suggestions to overcome systemic injustice with Black Excellence.” – Oluwatayo Adewole, The Spool

“The movie’s sexism is predictable and dull; how it navigates race is similarly obvious but a touch more interesting.” – Manohla Dargis, New York Times

“With the aim of maximizing the use of practical effects…there are a number of standout showdowns featuring dramatic powers.” – Nicola Austin, We Have a Hulk

“The visuals one scene offers will have college students studying in film classes for years to come.” – Allison Rose, FlickDirect

“[The] effects fit the world and don’t scream GREEN SCREEN at you like some movies.” – Julian Lytle, idobi.com

“The VFX, for the most part, are what you’d expect from any major film – except for one scene in the middle. The CGI in this scene is awful.” – Jamal-Dean Grootboom, Independent Online

How Is Jamie Foxx?

“Jamie Foxx is Jamie Foxx. He brings charisma, he brings charm, he gets you entertained…he does a great job.” – Sharronda Williams, Pay or Wait

“Foxx holds the center easily with the kind of imposing physicality and emotional stoicism that has long defined the male savior-redeemers played by John Wayne, Clint Eastwood, Denzel Washington and so on.” – Manohla Dargis, New York Times

“The real star of the picture is Fishback…such a natural presence, and it’s great to see a young Black woman showcased this way in a major action film.” – Clint Worthington, Consequence of Sound

“She elevates every scene she’s in. You really feel her absence when she’s not on screen.” – Oluwatayo Adewole, The Spool

“She brings a smile to your face when she’s on screen…this movie doesn’t work without Dominique Fishback.” – Sharronda Williams, Pay or Wait

“She’s this movie’s most reliable power and the only thing you’ll remember about it five minutes later.” – Justin Chang, Los Angeles Times

“While I could do away with the ‘aspiring rapper’ trope writers always saddle on at-risk black protagonists, Fishback at least tries to make the character her own.” – Travis Hopson, Punch Drunk Critics

How Are the villains?

“Like The Old Guard before it, Project Power has a major villain problem, and the story upon which these more charming elements hang suffers as a result.” – Clint Worthington, Consequence of Sound

“The way they deal with the villains, though very fun and action packed, seems a bit too quick and easy.” – Tessa Smith, Mama’s Geeky

“There’s a primary antagonist, sort of, who barks orders but is never explained…I’m sure this was done purposely to set up the sequel.” – Julian Roman, MovieWeb

Will it leave us wanting more?

“I would love to delve deeper into these characters and the origins of the pills, opening up the door for a possible sequel.” – Allison Rose, FlickDirect

“This could be turned into a franchise but it also just works as a standalone. You get to the end and you feel entertained and fulfilled.” – Julian Lytle, idobi.com

So, it’s worth a stream?

“Netflix has indeed found a niche in adrenalized action flicks that’ll keep you entertained during lockdown while providing a little more nuance than you might expect, and Project Power fits right into that niche.” – Steve Pond, The Wrap

“Since you’re sitting at home, scarfing entertainment on the small screen, there’s an impulse to say, ‘Check this out! It’s good enough!’” – Owen Gleiberman, Variety 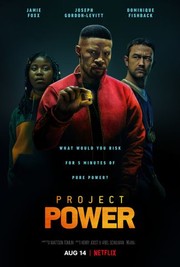 #1
Adjusted Score: 66.598%
Critics Consensus: Although it wastes some of the potential of its premise, Project Power is a slick, fun action thriller - and features a star-making turn from Dominique Fishback.
Synopsis: An ex-soldier, a teen and a cop collide in New Orleans as they hunt for the source behind a dangerous... [More]
Starring: Jamie Foxx, Joseph Gordon-Levitt, Dominique Fishback, Rodrigo Santoro
Directed By: Henry Joost, Ariel Schulman

Disney Vs. Pixar: The Battle of the Animation Powerhouses

25 Fall TV and Streaming Shows To Look Forward To