Critic and writer Ian Thomas Malone says casting is key to the strength of this Oscar winner about Chilean trans woman Marina.

This year, Rotten Tomatoes expanded our list of the best-reviewed LGBTQ movies of all time to 200 films. To celebrate those works and mark Pride month, we asked a number of Tomatometer-approved critics to reflect on the LGBTQ movies that influenced their lives and their work.

One of the great challenges transgender people face is learning to deal with those who think we deserve to be treated differently because of who we are. For some, facing this idea that universal human rights are not actually meant to be universal can lead to outrage. In Sebastián Lelio’s A Fantastic Woman, protagonist Marina meets the challenge again and again as she is put in positions that undermine not only her gender identity, but also her basic dignity as a human being. As we follow her, the film offers a painstakingly authentic portrayal of transgender life.

Too often, transgender narratives in film center themselves on the mechanics of transition, placing great emphasis on the pain of a soul in conflict with the nature of its being. A Fantastic Woman is a film set after all of that dust has settled, starring a transgender woman firmly settled in her post-transition world. Marina thrives in her new environment, able to share her talents as a singer in Santiago, Chile on he­r terms, presenting as the individual she always knew herself to be. She shares her life with her partner, Orlando, an older man with an open heart and a thirst for life.

The conflict in A Fantastic Woman comes not from Marina’s inner turmoil, but from the prejudice of others. Orlando’s sudden death from a brain aneurysm brings out the worst in his family, who treat Marina as an abomination; to them, their relationship is proof that he must have been suffering from dementia. The police similarly view their relationship with suspicion, harassing Marina at work and subjecting her to invasive bodily inspections as she struggles to cope with her sudden loss. Of all the many ways transgender people find rejection from society at large, the idea that Marina would not even be allowed to grieve with dignity strikes at the core of injustice.

Lead actress Daniela Vega, in just her second film role, makes a strong case for the power of casting transgender people in trans roles. Marina pushes back on the various indignities she’s expected to endure with resounding grace, acknowledging the realities of her situation but never backing down even after being physically assaulted. Vega’s subtle expressions speak volumes as she stares bigotry square in the face, and refuses to stay away from the wake or funeral. A cisgender actor can ponder the meaning of the “trapped in the wrong body” trope, but Vega carries herself as a woman who knows what it’s like to have someone try and strip you of your humanity.

A Fantastic Woman, which won the Oscar for Best Foreign Language Film at last year’s Academy Awards, is a powerful testament to the universality of the transgender experience. The hardships that Marina endured in Chile are uncomfortably similar to many of my own here in America. A transgender person’s romantic relationships are subject to so many unnecessary lines of inquiry by a world that too often refuses to accept the normalcy of our existence. Throughout the world, we live, we love, and we prosper each and every day.

The onslaught of transphobia that Marina faces throughout the film is an unnecessary fact of life for many of us, and A Fantastic Woman triumphs through Marina’s resiliency despite her circumstances. Transgender people live life fully aware that bigotry cannot be vanquished overnight – we just want a chance to find some sense of happiness.

Ian Thomas Malone is an author and podcast host based out of Long Beach, California. Check out her latest reviews here. 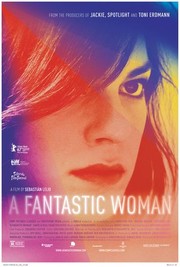 Movies Leaving Netflix at the End of October 2020

Movies Leaving Netflix at the End of October 2020