These moving dramas, inventive comedies, nostalgic favorites, and stone-cold classics may just change your life, too.

For Hispanic Heritage Month (September 15-October 15), Rotten Tomatoes asked seven Hispanic Tomatometer-approved critics to share a movie they hold dear and tell us why. They run the gamut from classics that continue to inspire (Stand and Deliver) to seminal game-changers (Salt of the Earth) to movies made for little people that had bigger things on their minds (The Book of Life, Spy Kids). Each made an impression with these critics, one that ignited or sustained their passion for movies and gave them a valuable perspective on identity. Check out the films below. 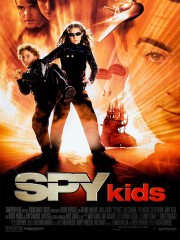 Director Robert Rodriguez learned early on in his career about the power of identity and authenticity, so it was a no-brainer to him that his first family-friendly film, Spy Kids, would center around a Latino family. “[When] you’re writing a script, you’re going to write what you know,” Rodriguez told me during an interview for Netflix’s We Can Be Heroes. “I grew up in a Latin family [so] that’s the first thing you write.”

Growing up, Spy Kids was a staple in my house. I loved the multicolored, larger-than-life adventure with Floop and his thumb minions and the idea that two kids could have the power to save their parents and the world. Looking back now, I realize how revolutionary that film was to young me – growing up feeling like I could be a spy, like I could change the world, and it was all centered around a Latino family like mine.

“It’s important to show people that diversity on screen. I’ve been doing it now for 30 years and I always got such great feedback from people when they felt themselves being shown on the screen as not criminals, not cartel members, not the same maids and gardeners as they usually did, but as superheroes, as spies,” Rodriguez said in our interview. “Imaging is so important. It changes your mind of what your potential is.”

The power that has for both kids and kids at heart is extraordinary and the reason why Robert Rodriguez continues to succeed with all of his projects. To see Rodriguez continue to fight to put that representation on screen and garner so much success makes me extra proud to be a kid of the Spy Kids generation and to still be following his career now as an adult. – Kristen Maldonado

Kristen Maldonado is a TV/film critic and host for the digital outlet The Fan Club and the inclusion-based video podcast Pop Culture Planet. She is a Tomatometer-approved critic, member of the Hollywood Critics Association, Latino Entertainment Journalists Association, and the Television Academy, and a two-time Shorty Award winner. Check out her YouTube channel. 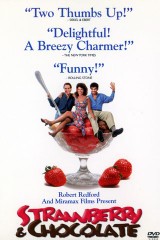 On Sundays, if we’d behaved, my great uncle took us out for ice cream. My siblings always knew what flavor they wanted; picking something that wouldn’t “seem gay” took me longer.

I felt seen when the “ice cream code” appeared in Tomás Gutiérrez Alea and Juan Carlos Tabío’s Strawberry and Chocolate, a delicate film about the unlikely friendship between an idealistic Cuban student (Vladimir Cruz) who likes chocolate, and a sophisticated gay artist (Jorge Perugorría) who goes for strawberry.

Watching the film when I was 8 gave me permission to grow into the kind of queer man unafraid to add sprinkles to his life and ice cream. With each further visit, its comforts become as easy to slip into as those languorous Sunday afternoons when the promise of sweetness made me believe a kinder world was possible. – Jose Solís

Jose Solís is a Honduran cultural critic. He is the founder/director of the BIPOC Critics Lab and the creator/host of Token Theatre Friends. Follow Jose on Twitter. 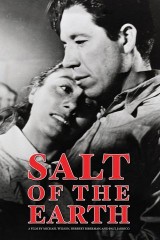 I’ll never forget my initial reaction after watching Salt of the Earth, one of the first films in Hollywood to depict a Mexican-American experience. I had decided to pursue a film degree and was introduced to the film while learning about the commotion that led to blacklisted filmmakers during the ’50s. I was in awe of its progressive premise, and as a Chicana, the female viewpoint spoke to me, considering the era, misogynistic household/culture, and social norms.

In addition, it was making a statement about Mexican-American mine workers and the importance of unions before any civil rights movements. Yet 66 years after its release, these social issues feel more relevant than ever. Its inspiring depiction of feminism, discovering your true self, resilience, and the power of community make this film an essential viewing that highlights the U.S Latino experience. – Rosa Parra

Rosa is co-founder/co-host of Latinx Lens, a podcast dedicated to highlighting Latino representation and contributions in film and TV. They also review films through their unique Latina lens. Check out the website for Latinx Lens. 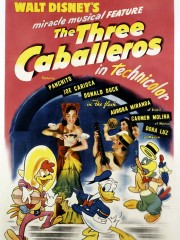 My routine during the VHS era as a child was cycling through the same movies over and over again. It was mostly The Sound of Music or any given animated Disney musical (primarily Fantasia and Beauty and the Beast). But there was one movie I have vivid memories of, probably the thing that got me hooked on ambitious animation and crushing on Brazilian men: The Three Caballeros.

As dated as it can be at times – very much a travelogue of Mexican and Brazilian culture through an American 1940s gaze – I can’t help myself from being caught up in the energy and musicality of it. The Bahía sections or Donald’s Surreal Reverie are a perfect encapsulation of its beauty and charm, be it in watching cartoons interacting with real people or simply in laughing along at the sound of the Aracuan bird.

Juan Barquin is a writer from Miami who programs the queer film series Flaming Classics and serves as co-editor of Dim the House Lights. They aspire to be Bridget Jones. Follow Juan on Twitter. 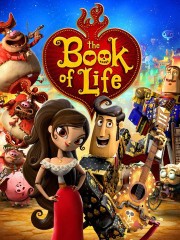 With a romantic spin, The Book of Life, from director Jorge Gutiérrez and producer Guillermo del Toro, renders Mexican culture’s relationship with death in exuberant iconography. Watching it at a multiplex was the first time I witnessed the medium of animation harnessed by a fellow Mexican for a feature film explicitly drawing from our traditions and art. Distinct character design, ornate figures that resemble wooden crafts, match the awe-inspiring Land of the Remembered, a colorful afterlife.

Before the plot arrives at that skull-friendly realm, Diego Luna, voicing Manolo, sings an acoustic version of Radiohead’s “Creep” after refusing to follow in his bullfighter father’s steps. That oddly moving track selection embodies the richly bicultural identity of Gutiérrez, a Mexico-born artist with deep ties to the United States, which suffuses the story set across two universes. For me, as someone existing at the junction of cultures and countries, that merging felt indelible. – Carlos Aguilar

Carlos Aguilar is a Los Angeles-based film critic and journalist whose work has appeared in prestigious publications such as the Los Angeles Times, Variety, The New York Times, The Wrap, IndieWire, and RogerEbert.com, among others. Follow Carlos on Twitter. 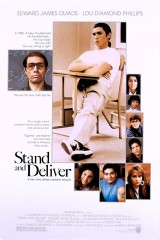 While my mother provided positive reinforcements as a woman of color in the inner city, there were none to emulate from the media. As a child, I fantasized about being Princess Leia, Wonder Woman, or one of Charlie’s Angels, but no one who looked like me or the people in my Latino community. That was until 1988’s Stand and Deliver.

Stand and Deliver tells the story of a true hero. High school teacher Jaime Escalante, played by Academy-nominated actor Edward James Olmos, inspired his underprivileged students at East LA’s Garfield High School to recognize their self worth and strive for better lives by putting in the hard work “con ganas” (with all your might) to pass the Advanced Placement exam in calculus.

“You are the true dreamers,” Olmos’ Escalante tells his students. “And dreams accomplish good things. You are the best.” Escalante’s words are simple but effective, inspiring not just Latinos but every child who should be taught to value themselves and reach for the sky.

Another memorable scene from the 1988 movie stands out. The turning point for the urban youth comes after hearing they are indeed special: “It was your ancestors, the Mayans, who first contemplated the zero. True story. You burós have math in your blood.” Stand and Deliver instills a sense of pride in our rich history and heritage that is still largely ignored in film and television.

It also portrays an accurate representation of urban youth in East Los Angeles. The cast represented my neighbors, cousins, and educators. To see that on the big screen as a young moviegoer was mind-blowing. Someone finally got it right, in part because a Latino filmmaker (Ramón Menéndez) was at the helm.

Thirty-three years since its release, Stand and Deliver still resonates with me in every way. – Lupe Rodriguez Haas

A member of the Hollywood Critics Association and Editor-in-Chief of CineMovieTV.com, Lupe Rodriguez Haas has worked every avenue in film and television from Hollywood studio distribution and marketing to being an entertainment producer and critic. Check out CineMovieTV.com. 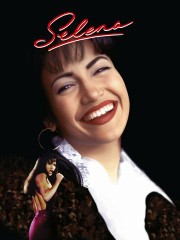 Selena is an iconic biopic. I mean, it put J-Lo on the map and it came out so soon after the death of the Queen of Tejano. But for me and a lot of other Mexican Americans, it’s iconic for more personal reasons.

As a biopic, Selena is and was a visceral representation of the Mexican-American experience. We have to try to be American enough for Americans and Mexican enough for the Mexicans and, to echo Edward James Olmos’ famous line: “It’s tiring.”

A vital piece of music and Mexican-American history, Selena is emotional and vital. To this day it looks at the little brown girls struggling to fit in and says, “I see you.” – Kate Sánchez

Kate Sánchez is a pop-culture critic and Editor-in-Chief of But Why Tho? A Geek Community. Follow Kate on Twitter.