In this exclusive video interview, the Kingsman actor breaks down what it took to rock out as one of music's greatest stars.

Eggsy’s come a long way. This month, Kingsman star Taron Egerton swaps tailored suits and ultra-violence for sequins and songs in Rocketman, director Dexter Fletcher’s biopic about music superstar Elton John. The first reviews from the Cannes Film Festival, where the movie premiered to a standing ovation, say Egerton captures the flamboyance and the heart of John, and that Rocketman could be a game-changer for the 29-year-old British actor.

In this exclusive extended sit-down, Egerton talks about his road to becoming Elton John, one that began with the first time he saw The Lion King. Egerton recalls the first time he met John – it was on the set of Kingsman: The Golden Circle, and John made him blush – and the bond the two men have developed. He also takes us through the challenges of becoming Elton John, from intensive vocal training to learning the piano (or at least learning how to convincingly fake it), and shares what John has meant to his life and his career. 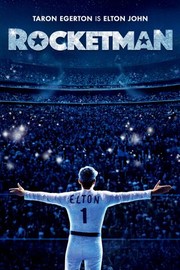 #1
Adjusted Score: 105.686%
Critics Consensus: It's going to be a long, long time before a rock biopic manages to capture the highs and lows of an artist's life like Rocketman.
Synopsis: ROCKETMAN is an epic musical fantasy about the incredible human story of Elton John's breakthrough years. The film follows the... [More]
Starring: Taron Egerton, Jamie Bell, Richard Madden, Bryce Dallas Howard
Directed By: Dexter Fletcher