Plus, Thompson says she wants to team up with Brie Larson and Danai Gurira in the next phase of the MCU.

The Mouse House’s streaming service Disney+ kicks off November 12 with a slew of hotly anticipated original series (The Mandalorian, High School Musical: The Musical: The Series) as well as some original films, the most exciting of which for many fans is its live-action remake of the 1955 animated classic Lady and the Tramp. Ahead of the movie’s release on Disney+, we sat down with four of its stars: Tessa Thompson and Justin Theroux, who provide the voices of lead romantic duo Lady and Tramp, as well as the canines who play those charming dogs on screen, Rose and Monte. (Yes, we interviewed the dogs). We asked the humans all the usual things – what they loved about the original film, whether we might see more of Thompson on Disney+ in a Valkyrie spin-off – and got into the serious stuff with Rose and Monte. Want to know how they really felt about recreating that famous spaghetti scene? Watch the interview above.

Lady and the Tramp is available on Disney+ November 12. 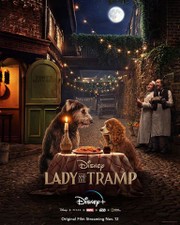