The Farewell's Awkwafina Talks Watching Movies with Her Grandma

The breakout star of Crazy Rich Asians and Ocean's 8 opens up about her new film and her grandmother's love for Kenan and Kel.

Crazy Rich Asians and Ocean’s 8 breakout star Awkwafina takes her first major lead role in The Farewell, the critically acclaimed new film that was the darling of this year’s Sundance Film Festival. In the movie, Awkwafina plays a New Yorker whose grandmother in China is diagnosed with a terminal illness; when the family decides not to tell gran she’s dying, and instead cooks up an elaborate family wedding as a ruse to get the everyone together one last time, Awkwafina’s Billi must head East.

The actress is earning raves for the role, which is one she says she relates to: she and her own grandma are close, and developed a bond watching movies together in the family’s Queens home. Here, Awkwafina remembers those days and nights watching movies, and talks about her gran’s favorite films, from Babe to Blue Streak and anything with Kenan and Kel. Really. 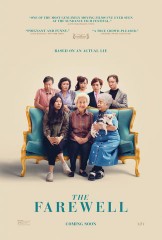 The Best Asian-American Movies of All Time

100 Best Movies Written by Women of All Time