This week at the specialty box office we find a pair off-kilter comedies that will have you giggling through the awkward stares and a crowd-pleaser of a musical featuring musician-turned-actress Jessie Buckley. Looking ahead to the fall movie season we see new trailers featuring Lee Pace (Guardians of the Galaxy) and Jason Sudeikis (Booksmart) in a based-on-a-true-story FBI caper surrounding the man who invented the DeLorean, and a moving documentary chronicles the life and tragic death of Star Trek actor Anton Yelchin. 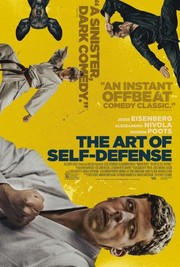 Jessie Eisenberg takes the lead in this dark and hilarious take on the awkward loner. The Social Network star plays an alienated office accountant who, after he is assaulted, joins a more-than-meets-the-eye karate dojo and follows the teachings of its unorthodox sensei to defend himself. Writer-director Riley Stearns’ script and Eisenberg’s deadpan comedic timing make one think of what Yorgos Lanthimos would have created if tapped to remake The Karate Kid. Brimming with satirical swipes at toxic male behavior, Joey Magidson of AwardsCircuit.com called it “The best skewering of masculinity since Fight Club.”
Playing New York and Los Angeles this weekend, expanding to limited screens on July 19. 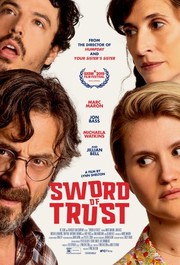 Lynn Shelton has assembled an all-star line-up of improv comedians for her latest feature, a Curb Your Enthusiasm–styled comedy centered on an infamous sword. The actors – including Marc Maron, Jillian Bell, Michaela Watkins, and Jon Bass – were given only the basic framework of each scene and had to improvise, prompting Dennis Harvey of Variety to write, “Everyone onscreen is so good, one wishes more tightly scripted comedy screenplays had such savory dialogue.” The cast of veteran actors meets the loose-form challenge and exceeds expectations in this hilarious “unscripted” feature. 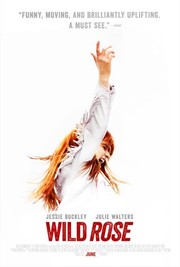 Last year, the Toronto International Film Festival saw a fresh crop of musicals about dynamic female musicians. Following the releases of Teen Spirit, Vox Lux, Her Smell, and the Oscar-winning A Star Is Born, the last of the bunch, Wild Rose, came out a few weeks ago in limited release and expands to more cities this week. Jessie Buckley has a star-making turn as the complicated and talented Rose-Lynn, whom Jeff Mitchell of the Phoniex Film Festival dubbed: “The best lead female performance of the year so far.” Strapped with two kids, a parole officer, and an unflinching determination to succeed, Glasglow native Rose-Lynn travels to Nashville in her quest become the first Scottish country music super-star.

In the 1980s, John DeLorean started to engage in illegal activity to save his struggling motor company and unwittingly befriends a charming, ex-con pilot turned FBI informant.

A portrait of the extraordinary life and career of actor Anton Yelchin.

The vaquita, the world’s smallest whale, is near extinction after years of relentless poaching; in this film we follow a group of activists who are fighting back against the illegal multi-million–dollar business.

The Indie Fresh List: A Powerful Drama, an Indie Thriller, and a Gonzo Horror-Comedy

Hear Us Out: A Goofy Movie Is the Unique and Underrated Star of Disney’s ’90s Renaissance