The Invisible Man Is Certified Fresh

Plus, The Whistlers is also Certified Fresh.

This week at the movies, we’ve got a mad scientist on the loose (The Invisible Man, starring Elisabeth Moss and Aldis Hodge). What are the critics saying? 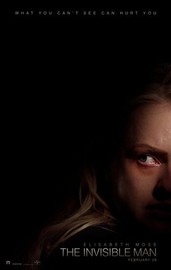 Once upon a time, Universal Pictures had plans for a so-called “Dark Universe,” in which the studio hoped to reboot all of its classic monster movies and bring the characters together in a united storyline akin to the Marvel Cinematic Universe. Unfortunately, after the mediocre performance of 2014’s Dracula Untold prompted a soft reset of the franchise, 2017’s The Mummy officially halted those plans when it also debuted to dismal box office returns and even worse reviews, forcing Universal to rethink their strategy entirely. The solution? Stick to standalone films, at least for the time being. That brings us to this week’s The Invisible Man, a new take on the classic H.G. Wells novel that shifts the focus from the titular character to the woman he terrorizes. Elisabeth Moss is the woman in question, an architect trapped in an abusive relationship with a brilliant but controlling scientist, who finally finds the courage to flee the relationship, only to learn her ex has committed suicide. Or has he? Is he the one stalking her from the shadows and breathing down her neck? And if he is, who will believe her? Critics say The Invisible Man is a smartly written thriller that tackles timely themes but also provides sufficient spectacle, and it benefits from a magnetic performance from Moss in the lead. The Dark Universe may be no more, but if Universal continues to make films of this caliber, they may be onto something after all.