Picking up just days after the events of the series finale of Power, spin-off/sequel series Power Book II: Ghost follows Tariq (Michael Rainey Jr.) as he begins to shape his own legacy separate from his father’s. The series features some returning favorites – among them Rainey Jr. and Naturi Naughton – as well as newcomers to the franchise, like Method Man, who plays a lawyer, and Mary J. Blige, who plays the maternal head of a powerful crime family. Ahead of the Starz series’ premiere, Rotten Tomatoes Editor Jacqueline Coley spoke with Rainey Jr., Naughton, Method Man, and producer 50 Cent about the big risks they took when they were Tariq’s age, why skeptical fans should embrace the newly unleashed Tariq, the people they admire who’ve made the leap from the music world to TV and film, and how the Power saga is set to evolve. Method Man also reveals how Denzel Washington’s Philadelphia performance helped shape his character. 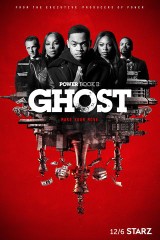